Climate Zones in the U.S. 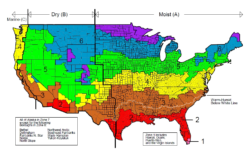 The contiguous U.S. is split into fairly horizontal climate zones. They are (roughly) as follows:
Zone 7 contains the very northern reaches of the Midwest and Maine as well as mountainous regions of Wyoming and Colorado. Zone 6 covers the area down to about the 43rd latitudinal line, extending further south along mountainous regions in the West and a small, mountainous area of California on the Nevada border.
Zone 5 reaches approximately 150 miles further south than zone 6 and extends to cover most of Oregon and Washington and a fair portion of Idaho.
Zone 4 extends approximately 150 miles or less further south than Zone 5; in the West, zone 4 is noncontiguous and includes the coastal regions of Oregon and Washington.
Zone 3 covers most of California and down to the 31st latitudinal line, with a fine white line marking a coastal region about half-way through it from the Atlantic to the middle of Texas.
Zone 2 Covers nearly the rest of the United States and the southeast corner of Arizona.
Zone 1 covers the very southern tip of Florida.