As part of our student engagement initiative, this August the Center will be welcoming Clara Weybright and Joseph Harder as fellows for the upcoming year.  The Climate Futures Fellowship Program is a year-long paid fellowship and provides the space and support for recent graduates to work on project proposals that align with the Center’s mission.  In the past, we have had creative and meaningful projects from fellows, including a podcast series titled Shifting Climates.  Katie Isaac, our current fellow, is working on Creation Care Action Plans for churches.  Her fellowship will end in a few weeks, so be on the lookout for announcements and access to her resources coming soon. 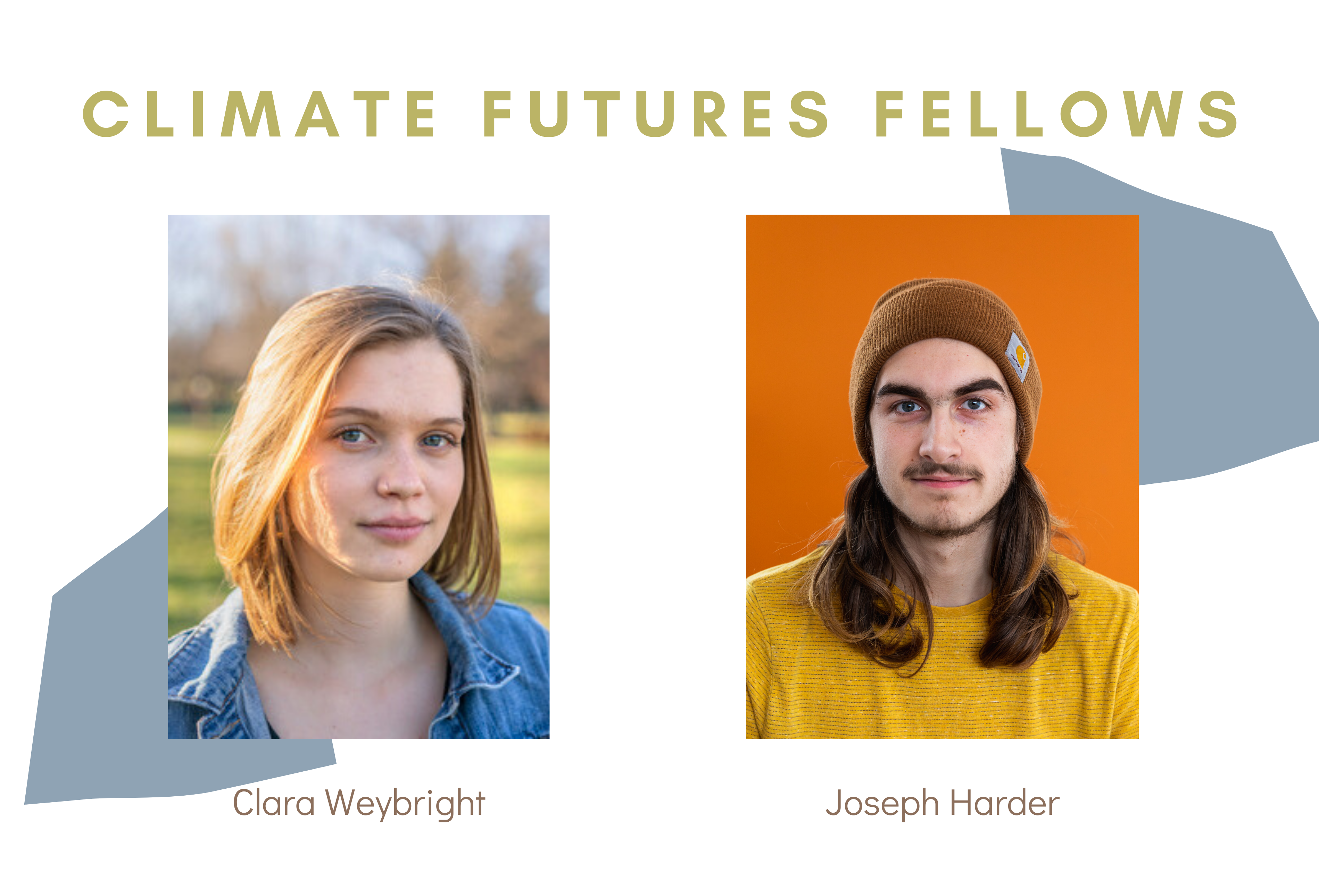 Clara Weybright is a recent 2020 graduate of EMU with a degree in Environmental Sustainability and minors in Honors and English.  “Environmental communication has always been at the forefront of my interests. I’ve enjoyed working more directly in the sciences, but I’ve always been most motivated by making the environment – particularly as it intersects with justice issues – compelling to everyday people. That’s where this fellowship comes in!” she explains.

Clara will be based in Washington DC in Mennonite Central Committee’s Washington office.  Last year she interned there as part of the Center’s Climate Advocacy Internship and “absolutely loved it.”  However, she left at the end of the summer wanting to do and learn more.  She will be working closely with Tammy Alexander, who was her supervisor during the internship last summer.  Tammy is the Senior Legislative Associate for Domestic Affairs at MCC and a member of the Center’s oversight board.  Clara remarks, “Some of my favorite afternoons that summer were the ones where Tammy and I were walking to a meeting somewhere, and I could pester her with questions about her work and what makes advocacy so important.”

During her fellowship, Clara will be focusing on “finding ways to connect communities with sustained political action surrounding climate change.”  Her project will include surveying congregations to “assess understandings of what it means to do climate advocacy faithfully,” and selecting some congregations that are “interested in committing to a long-term climate advocacy plan.”  She hopes that these congregations will be geographically, racially, and culturally diverse and is interested in utilizing her proficiency in Spanish to work with Spanish-speaking churches as well.  “After engaging in advocacy training myself, I’ll assist these churches in establishing sustained advocacy that’s tailored to their specific community,” she states.  This will also include connecting them to local and existing grassroots organizing initiatives, as well as “helping them identify and advocate their particular lawmakers.”  Clara will also be creating a climate advocacy resource that will be accessible from our website.

Clara will be moving to DC in mid-July to start her fellowship, but in the meantime is enjoying time with her family on their small farm in Lancaster, PA.  She is also writing for The Appalachian Voice and studying for the LSAT.  After this year’s fellowship, she is planning on attending law school.

Joseph Harder, a native of Harrisonburg, is also a 2020 graduate of EMU and majored in Interdisciplinary Studies with a focus in Music Composition, attempting to “roughly emulate a musicology major.”  Music has always been a big interest of his and is reflected in his project proposal.

For the coming year, Joseph will be completing an analysis of environmental ethics in Mennonite hymnody.  “I am hoping [this project] will be personally meaningful due to the fact that it sits at the intersection of perhaps my three most active circles of thought — faith, music, and environment,” he explains. “Each of these elements is something I have grown up with a relationship to.”  His family is Mennonite, his parents are both from musical families and have engaged with music throughout their lives, and he was pushed both as a kid and now to “think actively on how to live sustainably.”

Currently, preparations for the new Mennonite hymnal are underway.  Joseph recognizes that his project might be too late to have an effect on the new hymnal, but hopes he “can offer a fresh perspective to emerge alongside it.”  His work over the coming year will “give people a critical lens through which to understand how Mennonite environmental ethics have arrived at their current position, the things we are doing well, and the ways the Mennonite community can improve its relationship to the environment — in hymnals and beyond.”  Not only is Joseph’s project important for the Mennonite church, but it also creates space for self-reflection as he moves into the “broader post-college world” while trying to figure out who he is and where he belongs.  “I think there is something valuable to be learned through this sort of interdisciplinary approach,” he remarks, “ a sort of intellectual ecotone, a crossroads between trains of thought that will potentially allow for some fruit that no train could have provided alone.”

In the meantime, Joseph is the drummer of an indie soul band and also plays guitar, banjo, and piano.  From gardening and farming to hiking to “mapping out every road in the countryside surrounding Harrisonburg via bike,” he likes spending time outside when he is not working on music. Currently, he has been enjoying the wineberries and huckleberries on several trails in the area.  In the coming year, aside from working on his fellowship, Joseph will be trying to learn to make good curry and helping family friends remodel an ancient and abandoned house.

We are very excited to have Clara and Joseph join us for the coming year and are looking forward to working with these creative, passionate, and dedicated individuals!