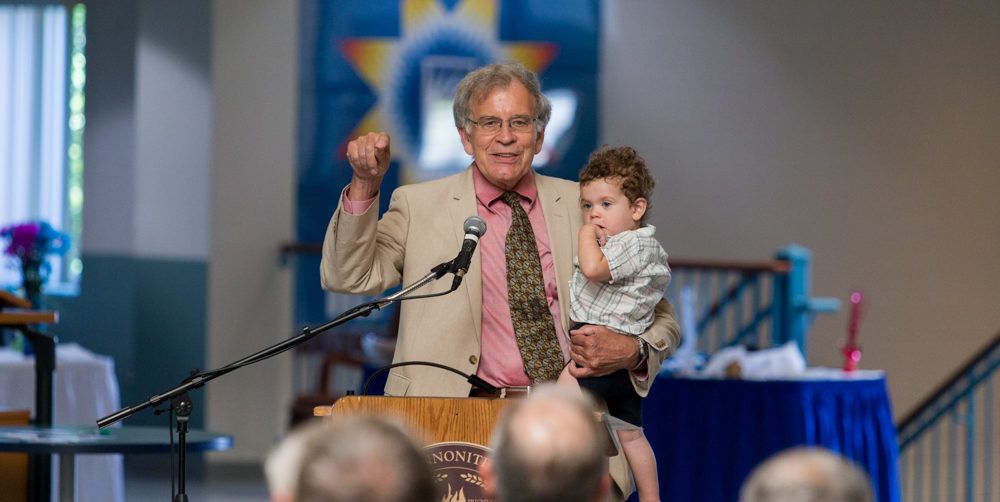 Holding his 19-month-old grandson, Ray Martin told the audience gathered at Eastern Mennonite University (EMU) Thursday afternoon why he had made a generous donation to study and combat the issues of climate change.

“We’re playing fast and loose with God’s creation,” Martin said. “I feel as if I owe it to him,” nodding toward his grandson, “to leave our planet, our earthly home, in good shape.”

The Center for Sustainable Climate Solutions, launched Thursday with a $1 million donation from Martin, will aid that goal. Led by EMU, the center will also include Goshen (Indiana) College and Mennonite Central Committee as founding institutions, with additional partners expected to join later.

“The Center will stimulate and motivate our commitment at all levels,” Martin said. “It will be a visible statement to the larger world that Mennonites are serious about climate change.”

Collaboration with other like-minded groups and organizations will create “an impact felt much beyond Mennonite circles,” he added.

An oversight board, chaired by EMU provost Fred Kniss, is developing more concrete plans and objectives for the Center. Kniss said the work will focus on four areas: connecting with a national and global network, researching best practices, educating by sharing findings, and innovating through new ideas and methods.

Members of the oversight board and leadership team gather.

“When a generous donor with a passion for addressing an important problem is able to link hands with an institution that shares his or her passion, good things can happen,” Kniss said. “We have an exciting year coming up. There’s a lot of work to do.”

Each of the three founding partners will have two representatives on the oversight board, with Deidre Smeltzer, vice president and undergraduate academic dean, and Jim Yoder, professor of biology, serving as the EMU representatives.

The interim EMU leadership team that will guide the work includes Jenni Holsinger, associate professor of sociology; Jonathan Lantz-Trissel, sustainability coordinator; Scott Barge, director of institutional research; and Jack Rutt, special projects support for the provost’s office. The oversight board expects to select a permanent director to start in fall 2017.

The Rev. Mitch C. Hescox, president of Evangelical Environmental Network, was present for the afternoon ceremonies.

“It feels like today we are taking a rather bold step forward to address climate change,” Snyder said. “However we are grounded in the strength of God’s faithfulness and a global faith community where we share the call to be good stewards of the planet for the well-being of all of God’s creatures.”

Among those present to celebrate the launch were members of the climate change activism community, including The Rev. Mitch C. Hescox, president of Evangelical Environmental Network; Karen Leu, program coordinator of Interfaith Power and Light; and Charlie Strickler, co-founder of Climate Action Alliance of the Valley, and several other members; and Tom Benevento, of New Community Project.

Martin, a native of Lancaster County, Pennsylvania, who now lives in northern Virginia, attended Eastern Mennonite College from 1959 to 1961 before finishing his bachelor’s degree in economics at Goshen. He went on to a long career in international development and global health work through USAID, the World Bank and other organizations.

This past April, he contacted EMU to broach the idea of making “a major investment in addressing climate change.”

Martin said he selected EMU to lead the effort due to his familiarity with the school, which was “hugely formative” in his life, along with EMU’s longstanding commitment to sustainability and its innovative, “cutting-edge” spirit with initiatives like the Center for Justice and Peacebuilding and leadership for the Collaborative MBA program.

“EMU’s history and the various programs that EMU conceptualized and launched were just evidence of an institution that had a lot going for it,” Martin said. “I came to see EMU was doing even more than I had realized, and I decided EMU as an institution to lead this might be a good bet.”

Martin cited capital projects and curricular alignment as two overt signs of EMU’s commitment to sustainability. The campus has one of Virginia’s largest commercial-scale solar arrays atop Hartzler Library, as well as LEED-certified residence halls and other energy-efficient buildings, and five campus gardens.

EMU also offers a major in environmental sustainability and weaves creation care into curricular offerings. This scholarly commitment was solidified in EMU’s accreditation with Southern Association of Colleges and Schools by the inclusion of an expansive Quality Enhancement Plan titled Peace with Creation: Sustainability from an Anabaptist Perspective

A second partnership with MCC

Quoting scripture from Hebrews 10, which encourages the church to “provoke one another to love and good deeds,” Campbell-Janz thanked Martin for his “holy provocation” on this issue.

“I’m excited about the founding of the Center and the challenge it presents to MCC to deepen its engagement,” Campbell-Janz said, noting the importance of climate change as a social justice issue. “Those least responsible for the climate change process are often the most affected.”

Likewise, Goshen College – which operates the Merry Lea Environmental Learning Center and provides leadership for the Mennonite Creation Care Network – sees this new effort as a natural place for partnership.

“This work really does confirm our longtime commitment as a denomination to address climate change, environmental stewardship and the care of the creation that God has provided for us,” Goshen College Provost Kenneth Newbold said. “It gives us yet another tool and resource to advance the important efforts we have undertaken. We’re here to focus on solutions and take action.”

Kniss, his EMU counterpart, said the oversight board will “flesh out” next steps in the coming months. An additional advisory board of experts will provide further input, and a broader consultation with partners is planned for spring 2017.